Keep It in the Family - Jeremie and JC Remember their Apprenticeship

While H&H Orlando doesn’t offer tattoo apprenticeships, artists JC and Jeremie have a history that goes beyond their jobs at H&H. For most of the artists, H&H Orlando is a mash-up of artists from around the country, but Jeremie and JC share a special bond that can only be described as being like family.

When Jeremie LaFrance found himself in need of a new mentor several years ago, established tattoo artist JC Hernandez, who was then working at another shop, offered to give Jeremie a helping hand, but that was it.

JC didn’t intend to bring Jeremie on as his apprentice. His first impression was that Jeremie was a, “Nice kid. A pretty boy, but not really cut out for this.” But Jeremie’s incredible work ethic and desire to learn soon made JC reconsider his stance to only offer him a little bit of guidance. “We started hanging out, and he had good principles. He was very respectful,” JC said.

Being an apprentice in the tattoo industry is no easy job. JC tested Jeremie’s commitment to the job and to learning by making him do odd jobs like mowing grass or washing his car. “Compared to what I was given, it was nothing,” JC said, referring to his own back-breaking apprenticeship. “I’m willing to help out the next person.” Luckily the next person was Jeremie, who to this day says he still “would mow a thousand lawns to do this job.”

Jeremie attributes much of his success and style to JC. “He taught me everything...line work, composition, color saturation, blending...” It’s not uncommon for a tattoo artist to hold back some knowledge from an apprentice for personal reasons, but Jeremie says, “JC didn’t hide anything from me.” JC also passed his incredible skill and knowledge of Japanese style down to Jeremie.

To JC, Jeremie was a model apprentice. “He did the right thing. He listened. He went beyond my expectations. The things I called him out on were never technical.” There was a moment where Jeremie accidentally drew the scales backward on an initial drawing of a fish - a small detail that probably would have gone unnoticed even if it had made it to an actual tattoo - but being an artist by nature, Jeremie didn’t worry JC when it came to final execution. “He’s never let me down.”

Eventually, JC came to work for H&H Orlando, but within six months, Jeremie had joined him as an artist at the shop. “He’s like my brother...my brother from another mother,” says Jeremie, who’s worked at the H&H Orlando shop with JC for over 2 years now. Fortunately, the sentiment from JC is the same, “The guy that apprenticed me - he’s like my dad. It’s like family. I would give anything of mine to Jeremie.”

And while Jeremie feels fortunate to still be working beside his mentor as a professional tattoo artist, the educational atmosphere remains - “At this point, I’m still learning something new everyday.” The attitudes are certainly what make JC and Jeremie some of the best at their craft, and while H&H Orlando doesn’t offer apprenticeships, the shop is certainly a great place to be when it feels like you’re with family. 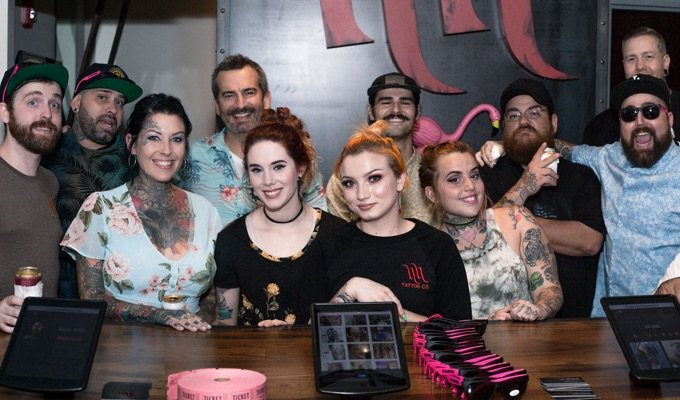 When it comes to getting a tattoo, that goes without saying. But when the H&H shop in Orlando, Florida faced a major remodel this year, it was more than just about looks.
Continue reading

H&H Orlando’s Cool-Aid and Isaac got to create a great mix of tattoo art over the weekend including references to popular video games at MegaCon 2011.
Continue reading